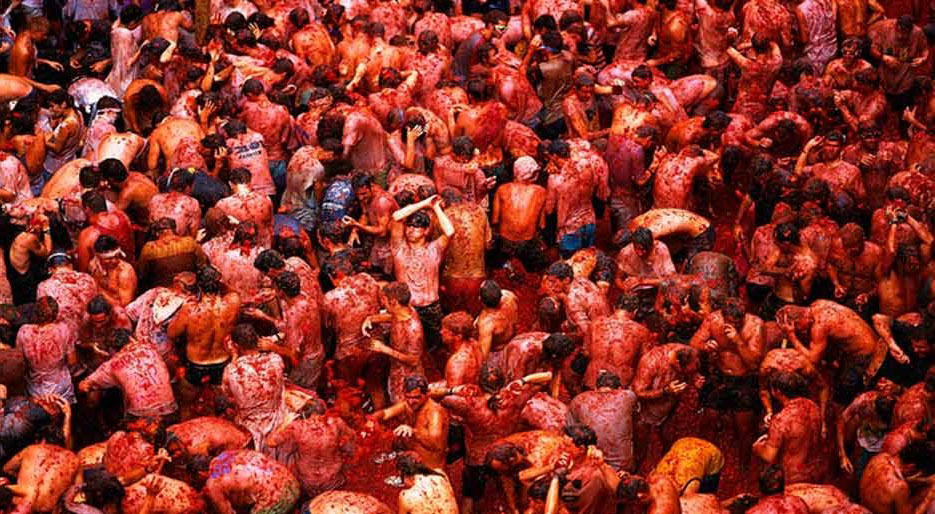 La Tomatina (The Tomatina) is a Spanish celebration where participants throw tomatoes to each other for fun. It is celebrated in the Mediterranean town called Buñol, in the Spanish region “Comunidad Valenciana” (Valencian Community), and it takes place every year on the last Wednesday of August.

The night before the said Wednesday it is customary to be partying until dawn, having for this purpose some drinks stands sponsored by the town hall of Buñol, and some other stalls managed by neighbors. They are open exclusively for this day.

Origin of The Tomatina

There are many interpretations about the origin of this popular festival, although the most reliable and historical version says that it all began in 1945: The city square (where the “Tomatina” is traditionally celebrated nowadays) was full of young people to witness the traditional festival of “Gigantes y Cabezudos” (a parade of giant carnival figures with grotesque heads). Some young people decided to join the parade since they wanted to participate. This action provoked the rejection of the organizers of the parade, resulting in a fight where the firsts pushed those who were wearing the giant costumes. One of them fell down and, when he got up, he started a fight with whoever was close to him, a situation that ended up involving more people. By chance there was a vegetables stand with open boxes displaying the products for sale, which became an opportunity that the angry crowd took advantage of: People started throwing tomatoes to each other until the law enforcement officers put an end to that “vegetables battle”.

The following year, during the date of the same Wednesday on August, it took place the same scenario than the previous year. The “only” difference consisted of people bringing their own tomatoes from home and, once again, the battle had to be stopped by the police.

During the following years, authorities banned the celebration. Nevertheless, neighbors were so headstrong that, in one way or another, the festival kept being celebrated.

In 1957, since The Tomatina festival was still forbidden, some young people planned to celebrate the “entierro del tomate” (burial of the tomato), with singers, musicians and comedies. They even brought a coffin with a large tomato inside, followed by a band that played funeral marches. That episode caused the authorities to think about the situation, and in 1959 they finally authorized The Tomatina again, although with some specific rules and conditions: Some of them were the inclusion of the “palo jabón” (soap stick), a greasy pole that participants have to try to climb one hour before the beginning of the Tomatina. The new rules also delimited the duration of the battle by using firecrackers that announce the beginning and the end of the fiesta.

Then, nowadays on what consists exactly the “Tomatina”?

On the last Wednesday of August, around 10 a.m., the first event of La Tomatina begins. This first event is the “palo jabón” (aka “cucaña”) which consists of climbing onto a greased post to reach a ham hung at the top.

As soon as someone has managed to take the ham from the top of the pole, they give the signal in order to start the battle of tomatoes, which is usually around 11 a.m.: The moment when it sounds the firecrackers announcing the beginning of the main event of the Tomatina.

Six trucks are in charge of distributing the almost 150 tons of tomato among the participants, which are a maximum of 22,000 people since 2013 (don’t forget you have to buy tickets if you want to participate!). The vehicles pass at a very slow pace among the crowd gathered along the route while a group of local neighbors, mounted on the tippers trucks, are in charge of distributing the tomatoes among the people, throwing them to them. One of the great moments of the party takes place when the back part of the trucks are open, pouring a huge quantity of tomatoes and juice on the streets, to which people plunges into while gloating and taking some “ammunition”.

After exactly one hour, the fight ends with the announcing of the second firecrackers. The whole square is dyed red, while rivers of tomato juice run down the streets.

The process of cleaning the streets is carried out by the local cleaning brigades, who are helped by the neighbors. The participants usually use the water from the hoses to remove the tomato stuck to their bodies and thus give themselves a first wash. Some others go to the puddle “Los Peñones” to wash themselves. After the cleaning, the streets of the village, which are made of paving stones, are left unpolluted due to the acidity of the tomato, which disinfects and thoroughly cleans the surface.

The fiesta of La Tomatina has some rules for the safety of participants and to continue the party without any incident. Therefore, the following rules must be followed.

We also give you a series of recommendations, so you can enjoy the Tomatina to the maximum. J

Rules to follow if you want to participate in La Tomatina

Recommendations for a better experience in La Tomatina

Do you want to participate in La Tomatina? Don’t forget you need to buy tickets!

Since 2013, in order to avoid overcrowding the area of the party, the town hall of Buñol decided to limit the capacity to the celebration of La Tomatina to 22,000 people. In previous years, when the capacity was not limited, the Tomatina’s attendance exceeded 45,000 people. On this way it is far better ensured the comfort and safety of participants.

There are official distributors of tickets for La Tomatina, although you can buy them online directly on its official website. You can access it through this link.

Some more pictures about La Tomatina

Down below we show you some pictures about La Tomatina, just in case you want to keep watching the fun you are missing if you don’t come! 😜

How much did you like this article? 😊
Tags:
Community of ValenciaValencia
Latest Posts