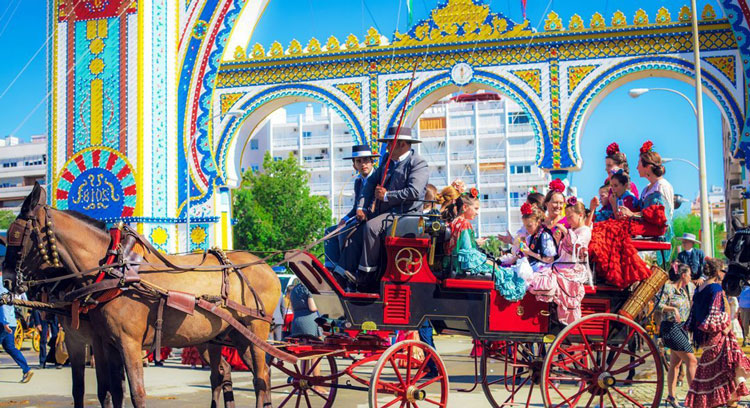 The “Feria de Abril” (April Fair) or “Feria de Sevilla” (Seville Fair) is a spring festival held annually in the Spanish city of Seville. Its origins date back to the 13th century as a trade fair, shortly after reconquering the city during the Christian Reconquista of the Iberian Peninsula. However, over the years the people of Seville gave to this fair a greater personality, until they managed to make it one of the most unique expressions of color and joy. 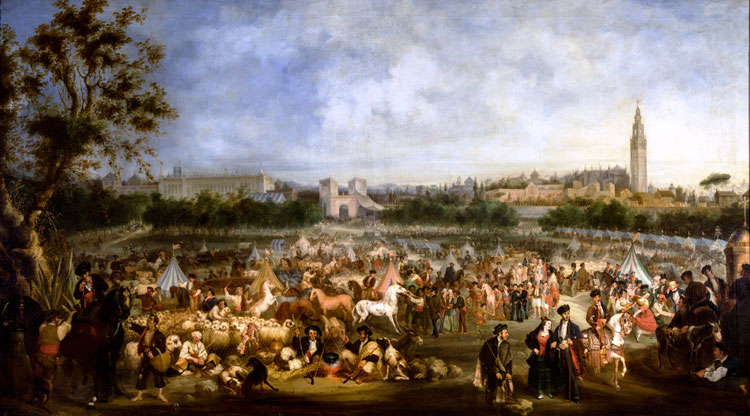 The first Fair of Seville, with the features of partying and joy as it is known nowadays and not just as a commercial event, took place on 18 April 1847 with the participation of 19 “casetas” (small meeting tends, but bigger than stalls). It was so successful that the following year, those in charge of organizing it (who were still considering the Seville Fair a mere commercial event) asked for greater presence of law enforcement officials because “Sevillian people, with their singing and dancing, are complicating the reach of deals” (Los sevillanos y sevillanas, con sus cantes y bailes, dificulan la realización de los tratos). 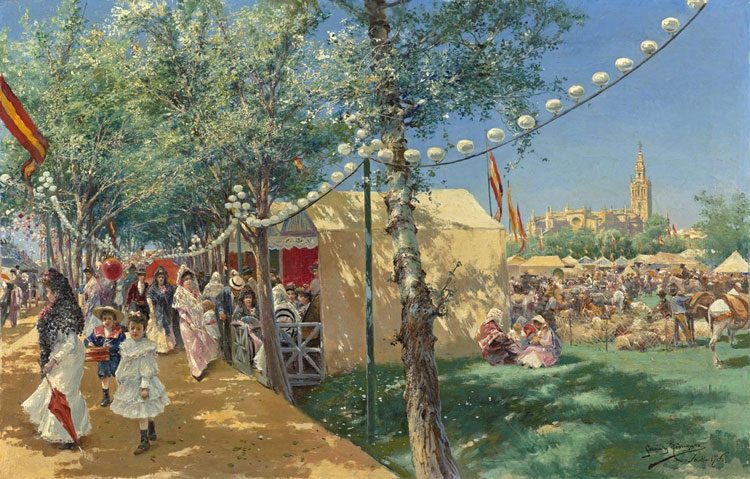 Currently, visitors of the Seville Fair are gathered in a large area called “Real de la Feria”, which consists of streets full of big stalls (“casetas”) beautifully decorated with lanterns. Through these streets walk 500,000 people every day (including horsemen and horse-drawn carriages) during the seven days of duration of the fair. 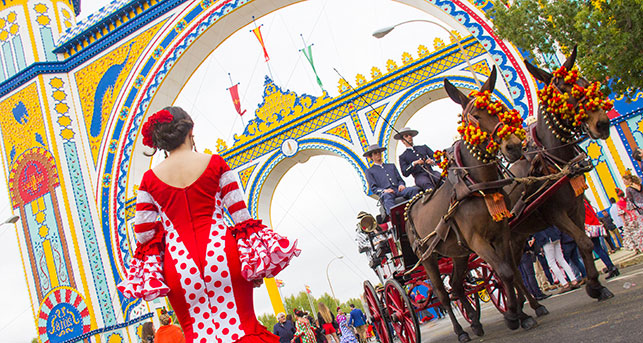 Main gate of the Seville Fair, a typical carriage and a woman wearing the typical Sevillian dress

The date of celebration of the Fair of Seville depends entirely on the dates on which the Holy Week is celebrated each year. Thus, the Seville Fair will begin on the second Sunday after the Holy Week and will last until the following Saturday. However, if this rule requires the Fair to be held entirely in the month of May, then it will not begin two Sundays after the Holy Week, but just one Sunday later.

​The April Seville Fair has a great economic and social impact on the city, and it has been declared “Fiesta of International Tourist Interest”, becoming one of the most emblematic fairs in Spain. 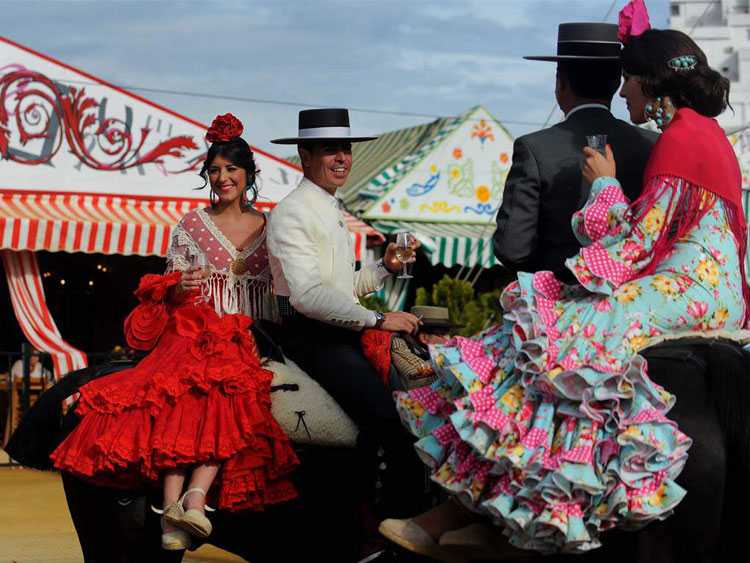 The Fair of Seville has two main areas: the “Real de la Feria” and the “Calle del Infierno”. Below we describe them, indicating the main activities that are carried out on each of them.

The “Real de la Feria” is the main promenade where visitors, horsemen and carriages march, and where you can find the “casetas” (we explain them in the next section). In other words, this is the main place where the Fair of April of Seville takes place. 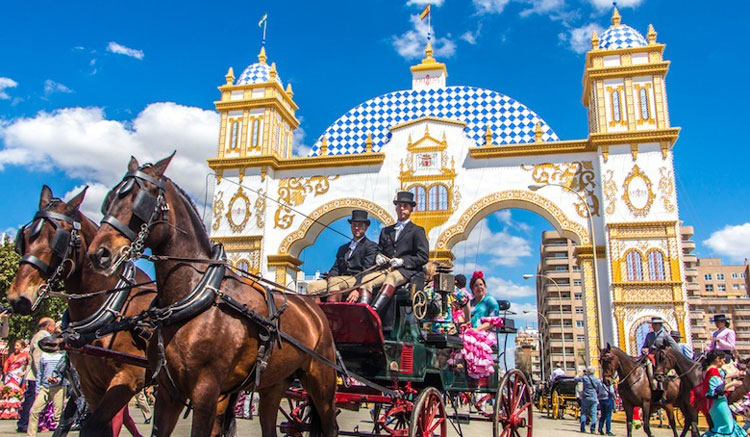 Part of the main gate of the Seville Fair

The reason this place is called “Real de la feria” is because a “real” (the name of an old Spanish currency) was the price that horse drivers charged for taking people to the fair.

The Real de la Feria is free of any kind of advertising and it is regulated by strict rules, without which it would be difficult to preserve its visual charm. It has an area of 275,000 m2 distributed between 25 squares and 15 streets. Its cobbled streets and sidewalks covered with pipeclay are decorated with thousands of lanterns that hide 212,000 light bulbs, providing a very beautiful lights spectacle to the Seville Fair nights. 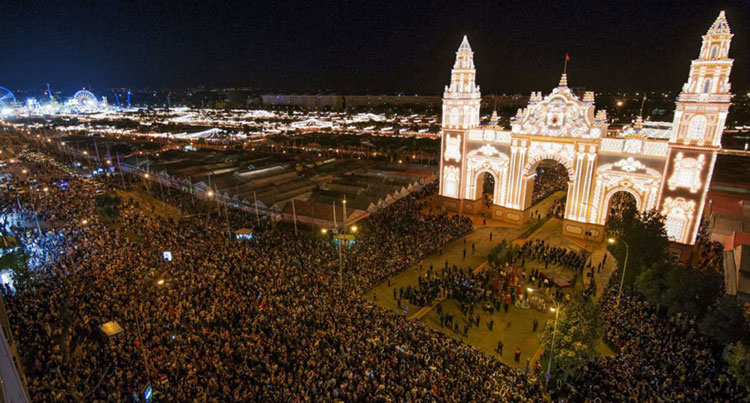 Seville Fair at night. The main gate to the “Real de la Feria” can be seen of the right, while the “Calle del Infierno” can be seen on the upper left corner

During the day it stands out the beautiful Spanish horses ridden by skilled horsemen (did you know that the famous “Mustang” American horses had Spanish origin? J Even the “cowboy culture” has Spanish origin, but we will talk about it in another article). There are also carriages walks, while the night is dedicated to enjoying the good and friendly atmosphere until the early hours of the morning. 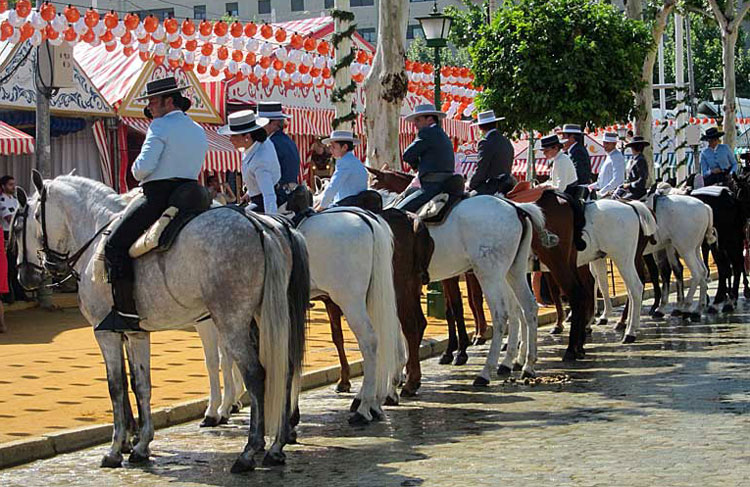 Some of the many skilled horsemen in the Seville Fair 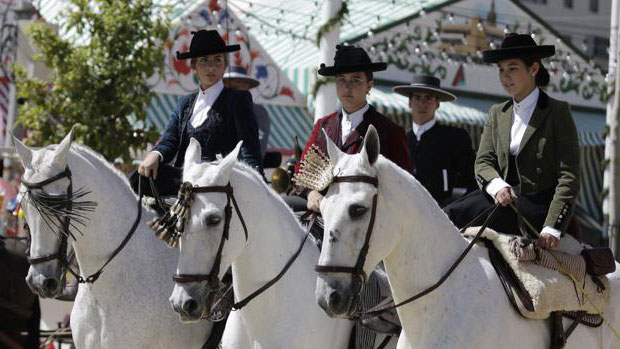 There are big car parks located in the surroundings of the Real de la Feria, just in case they are out of free carriages available to carry you to the fair.

In the early days of the Fair of Seville, when it was merely related to the sale of livestock, what it was referred to as a “caseta” was the equivalent of a stable. In 1849, the City Hall set up the first caseta as the term is nowadays understood. Its style was that of a tent, with the intention of monitoring and maintaining public order, which soon changed due to the festive atmosphere that prevailed during the event. In 1850 other casetas were placed with some elements of leisure, food and other utilities.

With the course of years, families and some institutions wanted to enjoy more time of that “new” kind of fair. The result was the increase of the number of casetas, each one decorated with its own style, and creating a new and very picturesque place. It was in 1919 when it was achieved some uniformity in the decoration style, which was based on a design by the painter Gustavo Bacarisas. The total uniformity of these casetas was achieved in 1983 when they established official standards. 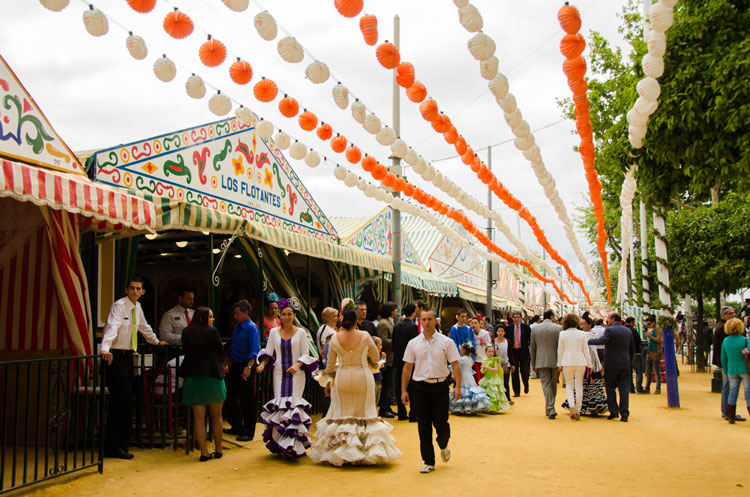 The Seville City Hall holds a contest called “Casetas Exorno” in order to reward the one best decorated. At present the number of casetas that make up the Seville Fair is over one thousand. The casetas usually have a “tablao” (a stage for some specific styles of dancing) for those who dance “sevillanas”. It is important to keep always in mind that many of the casetas are private, but there are many others that are free and open to anyone who wants to visit them (these ones are generally related to public institutions, political parties, labor unions and so on). 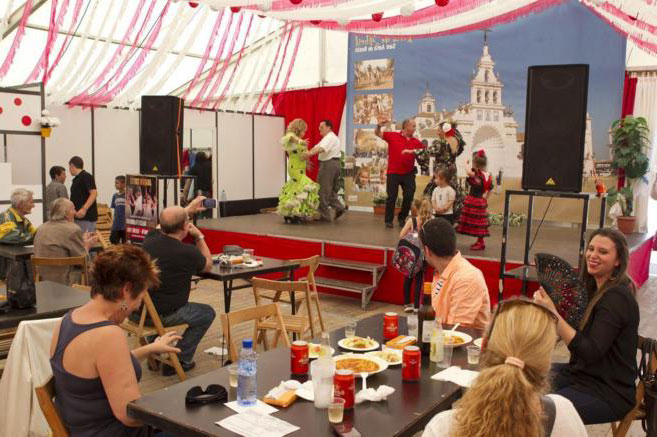 Interior of a “caseta” with people dancing on the “tablao”

Eating and drinking in the Seville Fair

The so-called night of the “pescaito” (little fish) is celebrated in the early hours of Saturday to Sunday, in which it is customary to serve a selection of fried fish. The rest of the days the casetas usually serve an offer of the traditional “tapas” of the city of Seville, such as Iberian ham, cheese and sausages, seafood, potatoes omelette (aka Spanish omelette)… For lunch, it is customary to prepare a “stew” consisting of typical Andalusian dishes. 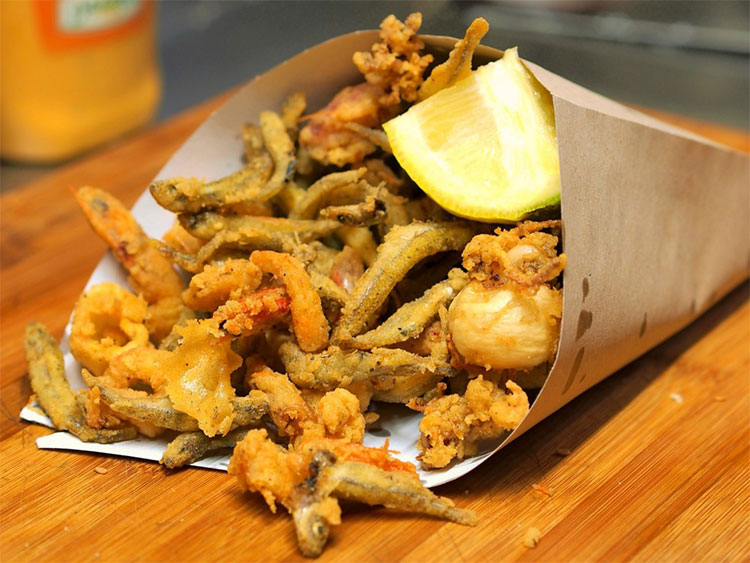 It is also typical to eat “buñuelos” or “churros”, which are called “calentitos” (hotties) in Seville, accompanied by hot chocolate. They are usually eaten for breakfast or after a long partying night right before going back to home.

At the fair of Seville, in addition to food, you can also easily get sodas and some alcoholic beverages. Normally the casetas have barrels of beer, although white wines tend to prevail. Since the year 2000, the “rebujito” drink has become very popular: a drink made of camomile with a lot of ice and sodas with some lemon-lime flavour; it is served in 1 liter jugs together with a few shot glasses for sharing purposes.

The carriage is the only transport vehicle allowed in the “Real de la Feria” area, in addition to official cars, as well as health, aid and public safety vehicles. There are approximately 1,400 vehicles authorized to go into this area during the Seville Fair. 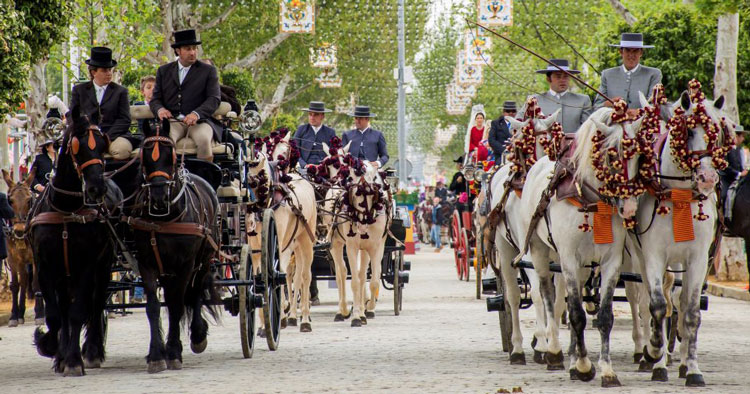 Carriages in the April Fair of Seville 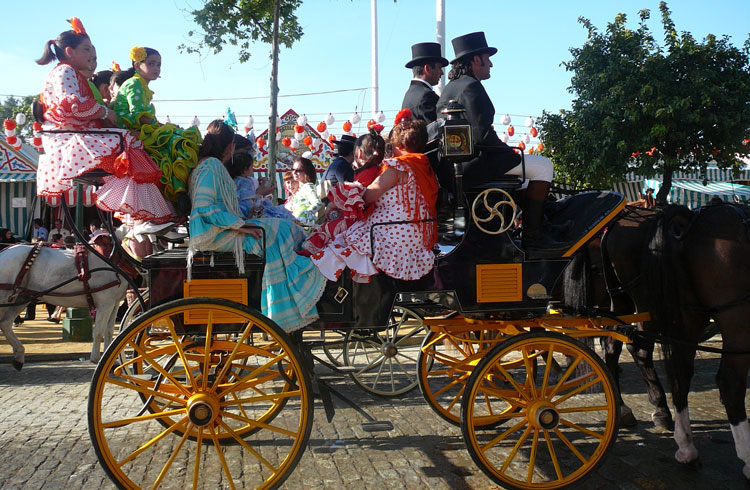 In the Maestranza Bullring (Plaza de Toros de la Maestranza) there is an exhibition called “Exhibición de Enganches” where carriages of all times are shown, from those of the aristocracy to those of the Andalusian bourgeoisie. 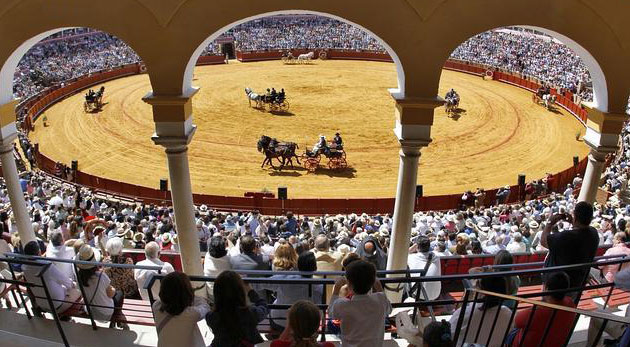 Exhibition of carriages in the bullring of Seville during the fair 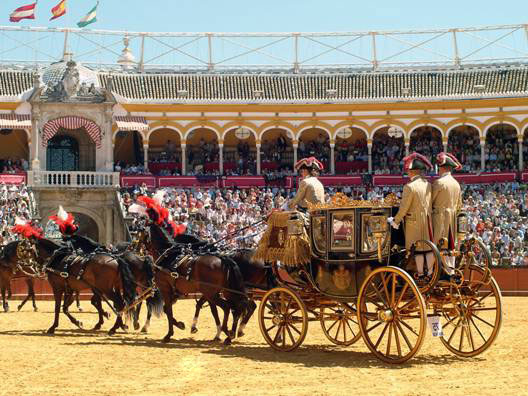 An example of the carriages exhibited during the Seville Fair

When it gets dark, the streets of the Real de la Feria are illuminated with Venetian lanterns and bulb decorations. Nevertheless, at night there are no horses nor carriages. The casetas serve food and it is usual to dine, “tapear” and drink until late night. Street food stalls also remain open, where you can also buy churros with hot chocolate at dawn. 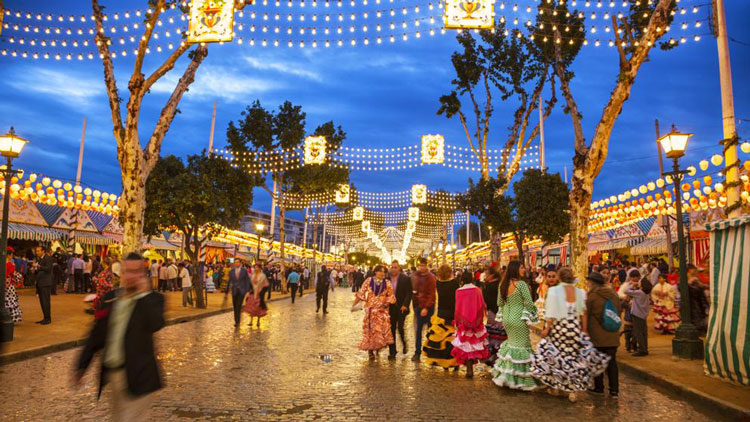 Carriages and horses are not allowed at night

This is how is traditionally known the amusement park adjacent to the Real de la Feria. It occupies an area of 87,000 m2, and it holds more than 400 fair activities destined to the amusement of all the public, but especially of the children. It is formed by so many attractions, shows, spectacles, raffles, circus and very diverse stands, where adults and children can enjoy the whole day.

The “Calle del Infierno” area consists of an amusement park

More pictures of the Seville Fair

How much did you like this article? 😊
Tags:
AndalusiaSeville
Latest Posts