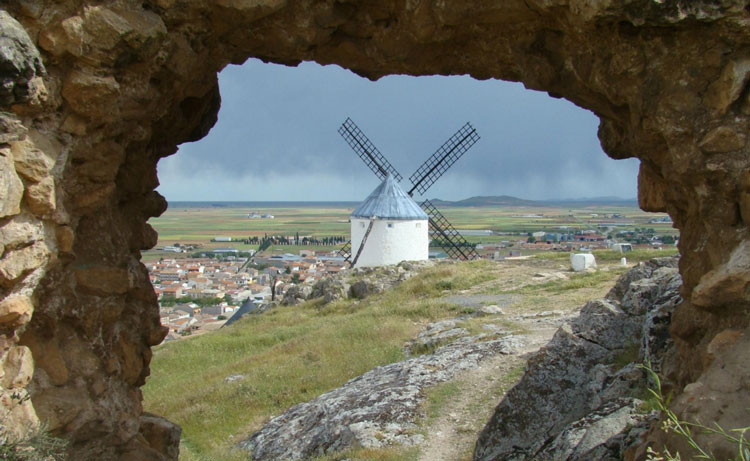 La Mancha is a natural region in the middle of Spain, located at the south of the Central Plateau, which is one of the most extensive and perfect flat plateaus of the Iberian Peninsula. Its limits are not very precise, although it is generally accepted that its extension is of more than 30,000 km². It covers part of the provinces of Albacete, Ciudad Real, Cuenca and Toledo, they all in the region of Castile-La Mancha (Castilla-La Mancha in Spanish). 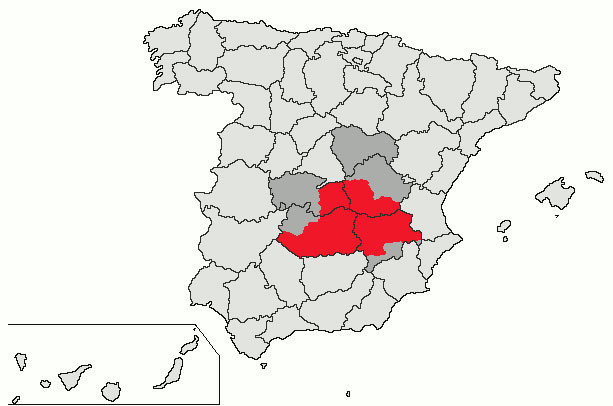 The publication and success of Miguel de Cervantes’ two novels about “Don Quixote de la Mancha” in 1605 and 1615, most of whose adventures and actions take place in the vast plains of La Mancha, have given this territory and its name worldwide fame and celebrity.

La Mancha is a region with a deep agricultural tradition, giving its name to highly appreciated agricultural products, such as “Queso Manchego” (Manchego cheese) and the breed of sheep from which it comes. Some other examples are the wine, saffron and melon from La Mancha.

The natural vegetation is reduced to small enclaves as a result of human activity, where the autochthonous forests are made mainly of holm oaks. There are two types of fauna that stand out in this natural unit: On one hand the steppe fauna, whose greatest exponent are birds such as the great bustard, the little bustard, dikkops (also known as stone-curlews), sandgrouses, harriers, kestrel and larks. On the other hand we have the avifauna related with the wetlands of La Mancha, whose extraordinary biodiversity has turned it into a center of attraction for ornithologists from all over the world. The red duck, the avocet, the stork, the masked duck, the gull-billed tern and the black-necked grebe are some of the most representative species.

La Mancha has a continental Mediterranean climate. The most significant factors in this aspect are: Harsh winters, hot summers, summer drought, irregular rainfall, strong thermal oscillations and notable aridity. These features are the result of the interrelations between some geographical and other dynamic factors such as latitude, the situation of the region within the Peninsula, the arrangement of the relief and the altitude.

Temperatures are somehow extreme due to the effect of continentality. The annual thermal amplitude (i.e. the difference between the average temperature of the coldest month and the one of the hottest month) is pretty high, usually between 18 and 20 °C.

In July, the average monthly temperature is above 22 °C in most of the region. Winters, however, are cold, with the average temperature in January falling even below 4 °C in some areas. Frost is frequent in winter and even in early spring and late autumn.

Regarding to the rainfall, it has an average of between 300 and 400 mm per year, being more frequent in spring and autumn, and very scarce in summer. For this reason, most of La Mancha is usually included in the so-called “dry Spain”. 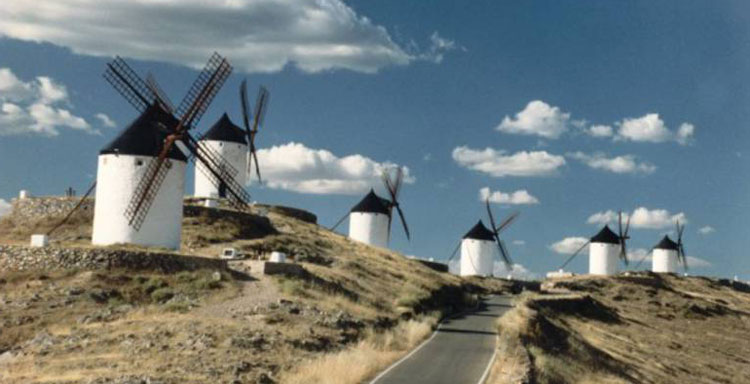 Some typical windmills from La Mancha

Watermills were the main instrument that was more commonly used in the Iberian Peninsula for milling wheat. However, towards the 16th century, the interior of Spain was hit by a drought, which led to a search for new sources of energy. The last Crusaders who arrived from the Holy Land and the arrival of the Order of Malta in Spain are considered the possible emissaries of the construction of windmills, especially given the flat orography of La Mancha.

These constructions, very identifying with the region, have become famous thanks to the influence they had on the most famous novel of the Spanish Golden Age: “The Ingenious Gentleman Don Quixote of La Mancha” (El Ingenioso Hidalgo don Quijote de La Mancha), by Miguel de Cervantes. In fact, it was thanks to this novel that the typical Spanish expression “Luchar contra molinos de viento” (To fight against windmills) was created; it means “to fight against imaginary enemies” due to the fact that Don Quixote, the protagonist of Miguel de Cervantes’ novel, fought against windmills believing that they were giants.

Down below we propose you a route that you can adapt to your tourist needs. We hope it helps you to enjoy the landscape of La Mancha as well as its windmills and typical towns.

You can also visualize this route through this link, which will take you to the itinerary that we have prepared on Google Maps.

Known as the Gateway of La Mancha, Tembleque has 3 windmills.

They are the first windmills that you will see if you go by the motorway Madrid-Andalucía. Two of them have recently been completely restored. The third, being privately owned, is in a worse state of conservation.

From the “Cerro de los Molinos” (Hill of the Windmills) you can get a panoramic view of the town of Tembleque. Take the opportunity to visit the town’s Plaza Mayor (Main Square), declared an Asset of Cultural Interest since it is one of the most beautiful in the region of Castilla-La Mancha.

Very close to Tembleque is El Romeral. It has 4 typical windmills in very good condition.

Here it takes place on April the “Fiesta de los Molinos” (Party of the Windmills), the moment of the year when the people of El Romeral start using them again for the grinding of grain. There are also theatrical representations of Don Quixote, as well as you have the opportunity to try the typical regional dish called “migas manchegas”.

El Romeral and one of its windmills

In 2008, the main hill of Consuegra was declared an Asset of Cultural Interest in the category of Historial Site. This declaration includes the windmills but also the nearby castle of La Muela.

It has one of the best preserved sets of windmills in Spain, with 12 of them in perfect condition. They are located on the Cerro Calderico (Calderico Hill) and date back to the 19th century, when they built 13 windmills.

The set of windmills of Consuegra is divided in two by the Castillo de la Muela (Castle of La Muela), one of the best preserved in the province of Toledo. It was built by the Muslims in the tenth century, but after the Christian conquest during the Spanish Reconquista, it became the capital of the priory of the Knights of Malta in Castile.

The windmill called “Rucio” houses the Museum of Milling (Museo de la Molinería). It is the only historic windmill in Spain that grinds every day.

Five historical windmills at one side of the Consuegra castle

The windmill “La Unión”, in the town of Camuñas, is also officially considered an “Asset of Cultural Interest”. It has more than 200 years of history.

Time ago it was considered it was built in 1866, the date that appears on the door. Nevertheless it is actually the date corresponding to its construction after a fire, as it is already cited under the name of “Molino Viejo” (Old Windmill) as the place where, in 1809, Juan Pedro Sánchez, brother of Tío Camuñas (a famous Spanish warrior in the Independence War against the Napoleonic France) was hanged.

The current name of the windmill (“La Unión”, which means “The Union”) is due to the fact that, after the fire, the people of Camuñas came together to contribute economically to its reconstruction.

In the town of Herencia there are 7 windmills preserved, where 4 of them have been completely restored.

The first Herencia windmill was built in 1790, when they were a total of eleven.

Currently, Alcázar de San Juan has 4 windmills. From the 19 windmills that originally had this town, nowadays there are only 4 left in good conditions on the Cerro de San Antón (Hill of San Antón). 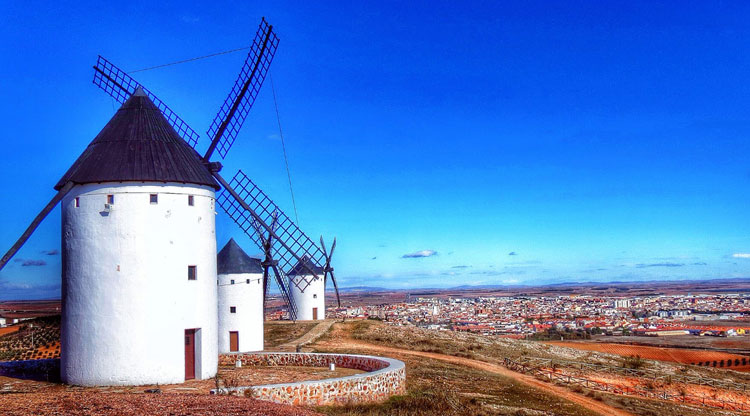 The Campo de Criptana mills are a set of ten windmills. They are distributed on the slope and top of a hill and three of them date from the sixteenth century. In 1978 they were declared an Asset of Cultural Interest.

Between the 16th and 17th centuries, Campo de Criptana had the largest number of windmills, reaching 34.

Mota del Cuervo is the last of the towns of the route of the mills of La Mancha, located in the province of Cuenca. Due to its location on a hill dominating an extensive plain, it is known as “El Balcón de La Mancha” (The Balcony of La Mancha).

Other places from La Mancha with windmills

In La Mancha there are many other villages that also conserve typical windmills and are worth mentioning. This is the case of:

Pay attention during your whole trip, since in La Mancha you can find windmills almost anywhere.

The route of “don Quijote”

The “Don Quixote Route” refers to the route followed by the protagonist of the novel we named above: “The Ingenious Gentleman Don Quixote of La Mancha” (El Ingenioso Hidalgo don Quijote de La Mancha), by Miguel de Cervantes. His adventures take place mainly in the lands of Castile-La Mancha, although in the novel he also reaches the Spanish regions of Aragon and Catalonia.

The official ecotourism route of Don Quixote is 2,500 km long and consists of a network of historical roads and perfectly signposted livestock trails. They link the places of greatest interest close to the points mentioned in the novel, although they do not follow criteria strictly linked to the literary work. The Don Quixote Route was declared a European cultural itinerary by the Council of Europe. 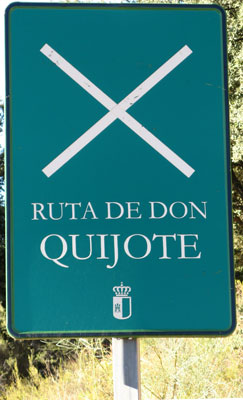 If you see this signpost while being in Spain, it means you are in the Don Quixote Route

The adventures of Don Quixote have been universally spread through the translations that have been made of the novel. In the region of Castile-La Mancha, Don Quixote is a symbol. Its legend has generated a cultural tourism that makes possible to contemplate the social and geographical reality that Cervantes masterfully described.

Among all the towns on the Don Quijote route, we would like to highlight “El Toboso”, in the province of Toledo.

This is a town famous for being the place where Dulcinea (whose real name was Aldonza Lorenzo) lived, a farm girl with whom the gentleman Don Quixote was in love. 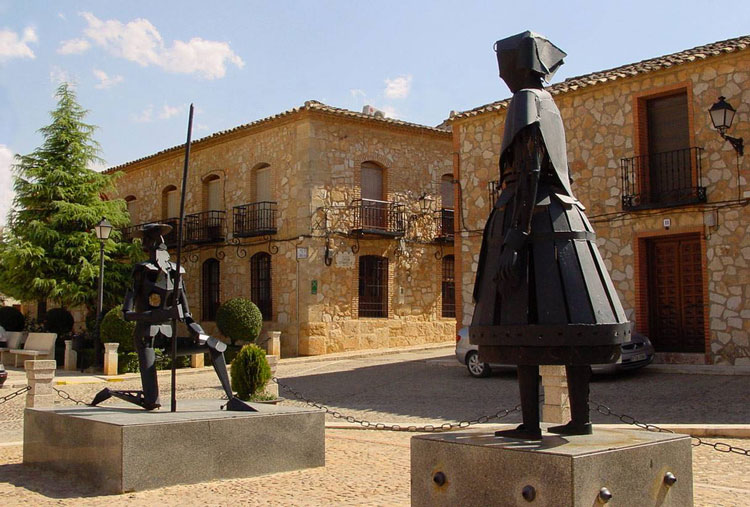 Dulcinea’s house has become a museum where furniture and farm objects from the 17th century are preserved.