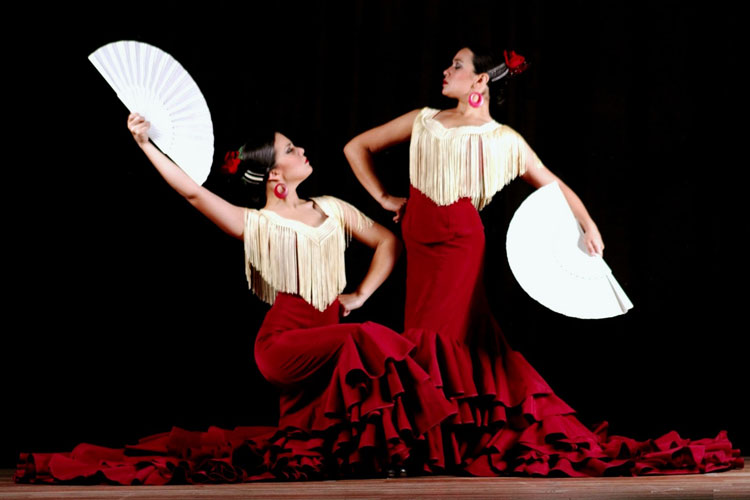 Introduction: What is Flamenco?

Flamenco is a Spanish musical genre that has its origin in the Spanish southern region of Andalusia, in areas of the region of Extremadura and also in the region of Murcia. Its main facets are singing, guitar playing and dancing. Flamenco also has its own traditions and rules.

As we know it nowadays, Flamenco dates back to the 18th century, and there is controversy about its origin: although there are different opinions, none of them has been proven historically. On the other hand, although the dictionary of the RAE (Royal Academy of the Spanish Language) associates “Flamenco” especially to the gypsy ethnic group, it is more than perceptible the fusion of the different cultures that coincided in the Andalusia of centuries ago.

Of all the hypotheses about its origin, the most widespread thesis is the one that associates flamenco to a Moorish origin: The cultural fusion that occurred in Andalusia during the Reconquista (natives, Muslims, Castilians) led to its creation. In fact, its germ already existed in the region of Andalusia long before the gypsies arrived, especially considering that there were gypsies in other regions of Spain and Europe, but flamenco was only part of the culture of those who were in Andalusia.

In November 2010, Unesco declared flamenco Intangible Cultural Heritage of Humanity at the initiative of the Spanish regions of Andalusia, Extremadura and Murcia. It is also an Andalusian Ethnological Intangible Cultural Heritage and it is inscribed in the General Inventory of Movable Goods of the Region of Murcia, established by the General Directorate of Fine Arts and Cultural Goods.

Its popularity in Latin America has been such that in Costa Rica, El Salvador, Guatemala, Mexico, Panama, Venezuela and Puerto Rico have emerged various groups and academies of flamenco. Its great diffusion and study in Chile has even allowed the appearance of well-known national figures, such as the guitarists Carlos Ledermann and Carlos Pacheco Torres.

In Japan, flamenco is so popular that it is said there are more flamenco academies in the Land of the Rising Sun than in Spain.

Flamenco is made up of three main elements: singing, dancing and guitar playing.

We explain them below.

The singer of flamenco is called “cantaor” instead of singer (cantante or cantador in correct Spanish), with the loss of the intervocalic “d” characteristic of the Andalusian dialect of Spanish.

The flamenco dancing (baile flamenco) stands out due to its intense expressivity: rhythmically feet stamping on the floor (which sometimes is made of wood to increase the sonority) while moving arms, wrists and hands in a way that increases the passionate impression of the dance.

In flamenco dancing (especially on its traditional styles) there is an expression called “duende”. It is used to refer to the “soul”, “passion” and “emotional maturity” that has (and demonstrates) the dancer while dancing. Due to those requirements, only dancers with a mature background (which usually is provided by age) are considered the best flamenco dancers, differently to what happens with other dancing styles where young people are considered the best performers due to their energy and strength.

Within the “baile flamenco” there are many dancing styles, but the most representatives can fit in the following groups: flamenco clásico, flamenco moderno, flamenco nuevo and flamenco puro. Keep reading to reach their descriptions.

Flamenco clásico (classical flamenco) is the flamenco dancing style more commonly used by professionals, and it has some similarities to classical ballet.

Dancers (usually women) use a technique where their arms are moved in a similar way as ballet dancers, while their back is bent with an intensity that reflects to the audience the passion of the flamenco dance.

Differently to other flamenco dancing styles such as “flamenco puro” (which has gipsy influence), in classical flamenco dancers don’t move their hips that much.

Flamenco moderno (modern flamenco) is characterized by the highly developed technique that requires its correct performance.

Modern flamenco dancers (women but also men) perform a very fast and precise stamping on the floor with their feet, creating a passionate melody whose complexity is increased with the use of additional elements such as shawls and fans, which provide an even higher spectacularity to the dance. Sometimes they even use musical instruments such as the typical Spanish and complex to master castanets, and sometimes they “just” clap. 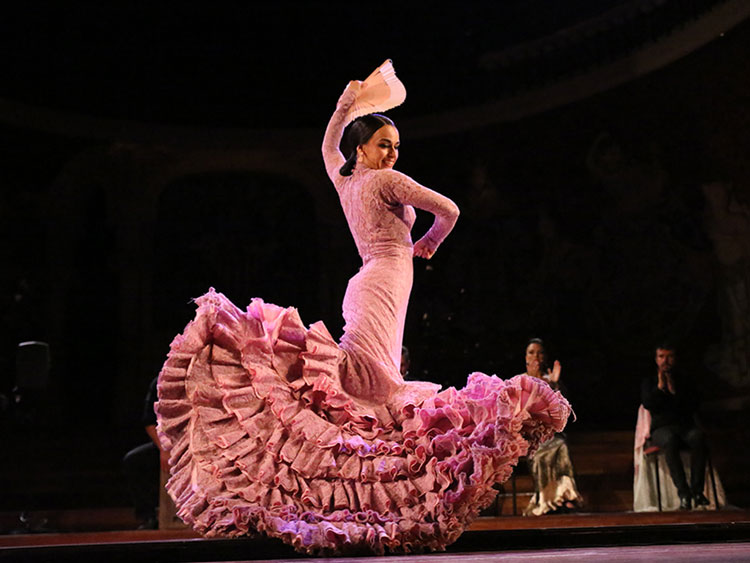 Flamenco nuevo (new flamenco) is one of the most recent dancing styles of flamenco, which was born in Spain during the decade of 1980.

From an outer point of view, it is specially differentiated from other flamenco styles on the clothes and costumes used by the dancers: in the case of men, they sometimes dance bare chested, while women use a simpler dress (in relation to the typical flamenco dress).

New flamenco dancers rarely use additional elements such as castanets, shawls or fans (as it happens with modern flamenco), but in exchange they include in their dancing elements from other music and dancing styles.

Flamenco puro (pure flamenco) is the closest dancing style to the gipsy influence.

Pure flamenco is performed solo, by a single dancer at a time, and it is rarely choreographed. Therefore it requires so much experience in order to create a spectacular dance, due to the importance of improvisation on this style. 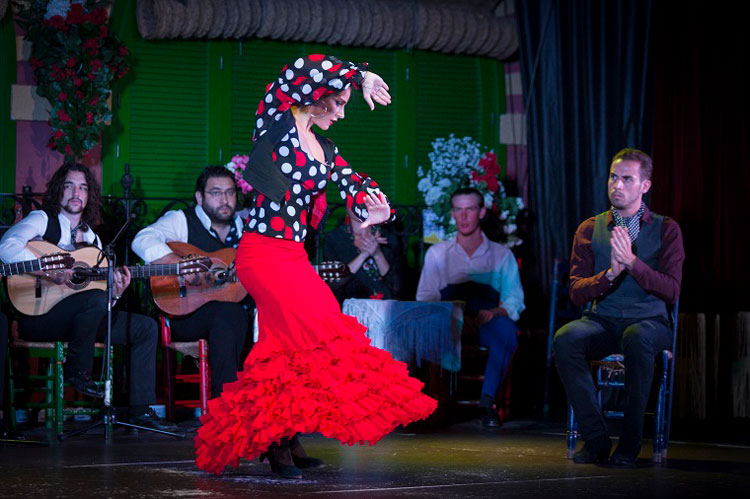 Modern “tocaores” often use classical Spanish guitars, although there is a specific instrument for this genre called flamenco guitar. It is less heavy, and its body is narrower than that of the classical guitar, so its sonority is lower and does not eclipse the singer. It is usually made of cypress wood, which gives it a brilliant sonority very suitable for the characteristics of flamenco.

In the past, materials like rosewood from Rio (Brazil) or India was also used, but it is currently in disuse due to its scarcity. The rosewood gave guitars an amplitude of sound especially suitable for solo playing. Nowadays, the most commonly used pegbox is made of metal, as the wooden one has tuning problems.

The tocaores use the techniques called “alzapúa”, “picado”, “rasgueo” and “tremolo”, among others. The “rasgueo” can be performed with 5, 4 or 3 fingers. The use of the thumb is also characteristic in flamenco guitar playing: the guitarists place the thumb on the top of the guitar and the index and middle fingers on the upper string to which they are playing, thus achieving greater power and sonority than the classical guitarist. The middle finger also rests on the guitar “golpeador” (it can be literally translated to English as “striker”) to achieve more precision and strength when plucking the string. Also, the use of the “striker” as a percussion element gives great strength to the flamenco guitar performance. 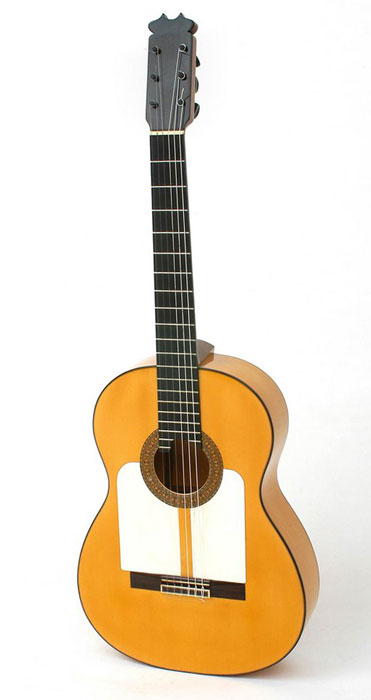 It is also commonly used the “falseta”, which is a melodic phrase that is interspersed between the successions of chords intended to accompany the song.

The accompaniment and solo playing of flamenco guitarists is based on both the modal harmonic system and the tonal system, although the most common is a combination of both.

Some flamenco songs are performed “a palo seco” (a capella), without guitar accompaniment. 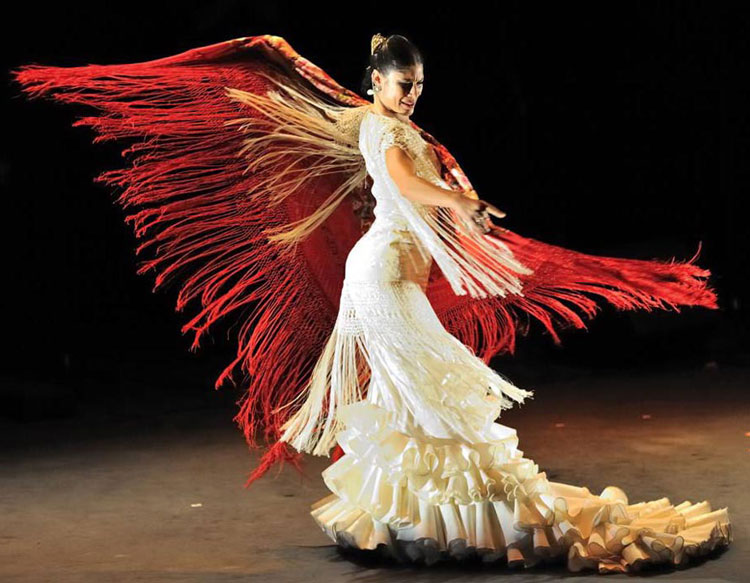 Flamenco is also danced using a shawl for higher spectacularity

How much did you like this article? 😊
Tags:
AlmeríaAndalusiaBadajozCáceresCádizCórdobaExtremaduraGranadaHuelvaJaenMálagaMurciaRegion of MurciaSevilla
Latest Posts