The villancico is a musical and poetic form in Spanish and Portuguese, traditional of Spain and very popular between the fifteenth and eighteenth centuries. The villancicos were originally secular songs with chorus, of popular origin and harmonized to several voices. Later they began to be sung in churches and specifically associated with Christmas.

Its name probably has its origin in the fact that these are compositions of a popular nature, sung by the villains or inhabitants of the villages, generally peasants or other rural inhabitants. They were sung at popular festivals, originally without a specifically religious theme, and the main themes were related to recent events in the village or region. The genre was later expanded to include some other diverse themes.

After the decline of the old form of the villancico, the term became simply a genre of song whose lyrics refer to Christmas and which is traditionally sung on that date. Nowadays, “villancico” is the equivalent to the English term “Christmas carol”.

Villancico songs are formed by two or three verses with a very variable number of syllables. Therefore, it lacks a fixed form, so it is a composition of enormous flexibility, although there is a marked tendency towards the abb scheme, with verses of eight and six syllables.

The term villancico also designates an estrophical form constituted by the sum of the traditional composition and its gloss, with which it was accustomed to accompany the “small songs” (cancioncillas), at least from the middle of the fifteenth century until the seventeenth century. 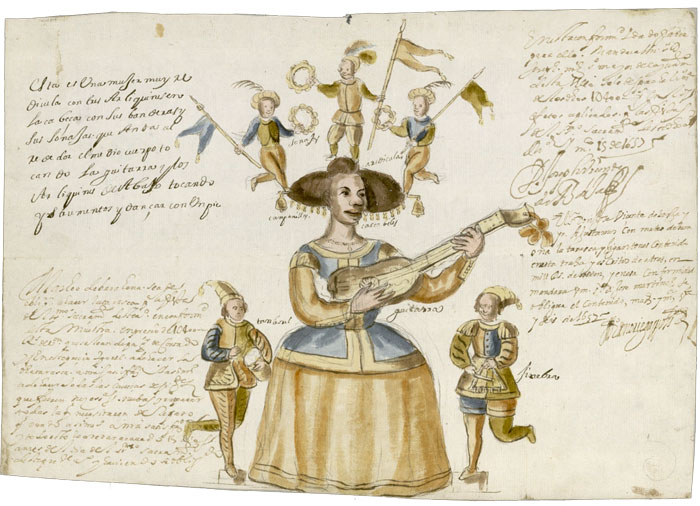 Giant for the Corpus procession (1657)

However, thanks to the research of scholars (e.g. Samuel Miklos Stern) we can say that the first manifestations of villancicos appear in the Mozarabic songs of the eleventh century. Critics recognize the core of peninsular lyrics in this type of song.

In its classical form, the villancico marks the guideline with the melody of the song supported by an accompaniment in grave tone that forms a good harmonic support by the internal voices. The upper register is the one that carries the text, which follows the melody in syllabic mode; the closing of the verses generally corresponds to the different cadences.

Notable composers of villancicos were, among others, Juan del Enzina, Pedro de Escobar, Francisco Guerrero, Gaspar Fernandes and Juan Gutiérrez de Padilla. Down below you can listen some of their classical villancicos.

Puer Natus Est Nobis is a sixth-century Gregorian chant sung as an introitus to the third mass of the Christmas liturgy. The melody of this composition was later used by the English composer Thomas Tallis as part of his Christmas Mass in the 16th century. In the 9th and 10th centuries, the Christmas sequence became popular in the liturgy of Cistercian monasteries.

The first adaptation of popular secular music to religious songs is due to Adam of St. Victor, a French monk of the 12th century, with the creation of a mixed genre that would later favour the use of popular melodies as Christmas songs. In the 12th century, in France, Germany, and especially in Italy, under the influence of Saint Francis of Assisi, it was developed a strong tradition of folk songs in the vernacular languages of each region.

English Christmas carols appear for the first time in a 1426 play by John Awdlay, a Shropshire chaplain, who lists 25 Christmas songs, probably sung by groups of people, cider drinkers, who went from house to house.

The songs we now know as carols were originally songs sung in groups during celebrations such as the harvest holidays and at Christmas. It was only later that Christmas carols were sung in churches and specifically associated with Christmas.

In the eighteenth century, the last time villancicos were sung during religious celebrations, it was relegated to the celebration of Christmas festivities. For this reason, villancicos remained in the popular memory as a genre of specific song of Christmas, going on to denominate by extension to all songs related to Christmas.

Today, in Spanish-speaking countries we call “villancico” to a very heterogeneous set of popular musical compositions of very diverse origin, era, and style sung in Christmas (somehow like “Christmas carols” in other countries).

Below you can listen to some examples of current and popular Spanish Christmas carols.

How much did you like this article? 😊
Tags:
ChristmasThe whole Spain
Latest Posts