The result of mixing Asian with Spanish fashion
Manila shawl 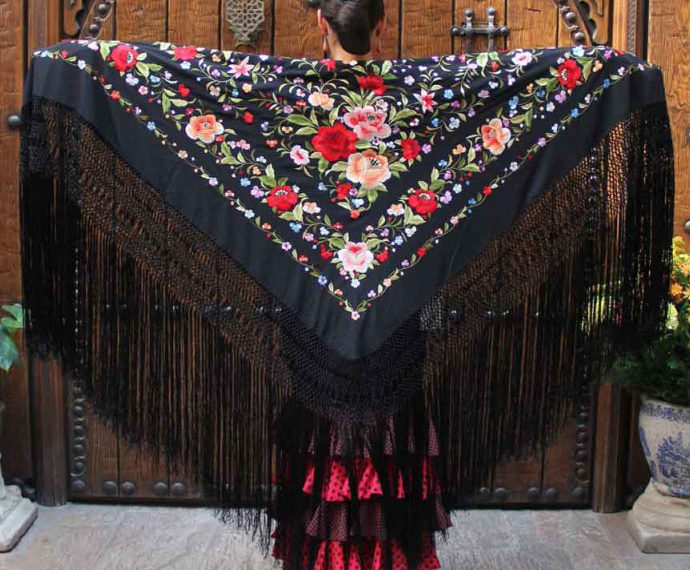 The Manila shawl is a square silk canvas decorated in vivid colors with flowers, birds or fantasy shapes, and finished around its perimeter by fringes. It is of Chinese origin, and it became very popular during the eighteenth century in Spain and Latin America as a complement to women’s clothing.

In the Spanish traditional culture of the feminine dress, the Manila shawl is associated with the Andalusian woman, the “manola” of Madrid (a typical garment from that region), the casticism in the universal geography of Hispanic influence, the flamenco and the elegance of exotic nature.

In general, the Manila shawl is worn on the shoulders, folded diagonally forming a triangle. Its dimensions vary slightly but it should always cover the back, reaching the ends of the fingers of each hand with the arms open perpendicularly to the trunk. It is also usually tied on one side, at hip level.

To storage them, the shawls require an expert folding system, but if you don’t know it, it is enough to hang them from a hanger while keeping them within a cover. Another option is to store them in a drawer without folding: just drop them and change their position from time to time. There are also quilted conservation tubes where Manila shawls can be rolled up between two larger cotton fabrics to prevent dust from acidifying the garment.

If it gets some creases or you want to enhance the embroidery, the Manila shawl can be ironed backwards with a steam iron.

History of the Manila shawl

The origin of the Manila shawl is in the ancient China. However, it took its name from the capital of the Philippines (Manila), ancient territory of the Spanish Empire and origin of maritime trade routes during the Spanish imperial era. 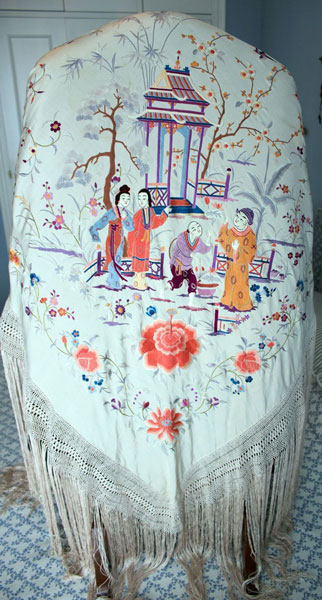 Nevertheless, before the creation of the currently known as “Manila shawl”, the Philippines had what they called “alampay”: a feminine garment that was used by native women and that covered their heads and necks. These alampay had a very similar shape too: square and they were folded to create a triangle while wearing them on the shoulders.

The European adaptation of the alampay by Spain provided to this garment the very beautiful fringes at its borders, creating beautiful knotted patterns through a technique learnt from the Arabs.

This new alampay with European style was called “pañuelo” (“kerchief” in Spanish) in the Spanish Philippine, and during the 18th and 19th centuries, it was a key element in the wardrobe of upper class Filipino women.

The popularity and beauty of the Manila shawl became so appreciated, that it was exported as a luxury product from The Philippines to Nueva España (the old Center and North American Spanish territory) and Europe. It was used even as a gift to royal families. 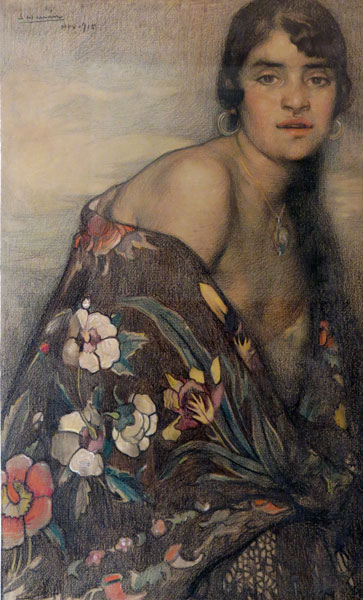 Furthermore, the independence of Mexico (1815) had an enhancing effect on the popularity of the Manila shawl in the European Spain: Trade routes from The Philippines didn’t stop in America anymore but they went directly to the Spanish city of Seville. This allowed the transport of more units of this garment from Asia to Europe, as well as more variety of it. In addition, this fact coincided with the new Parisian fashion, whose tendency said women had to dress with their shoulders uncovered. Spanish women followed the French tendency, but they found the Manila shawls the perfect complement for dresses with bare shoulders.

The independence of The Philippines in 1898 made Spain to lose its access to the silk trade, with the consequence of allowing weavers in order to recreate this garment. Now, Manila shawls got embroideries closer to European tastes (toads, pagodas and other Chinese elements were not used anymore), and specifically the Spanish ones. They became more colorful and flower motifs got higher prominence; Manila shawl fringes also got some adaptations, becoming longer in order to accentuate women movements. 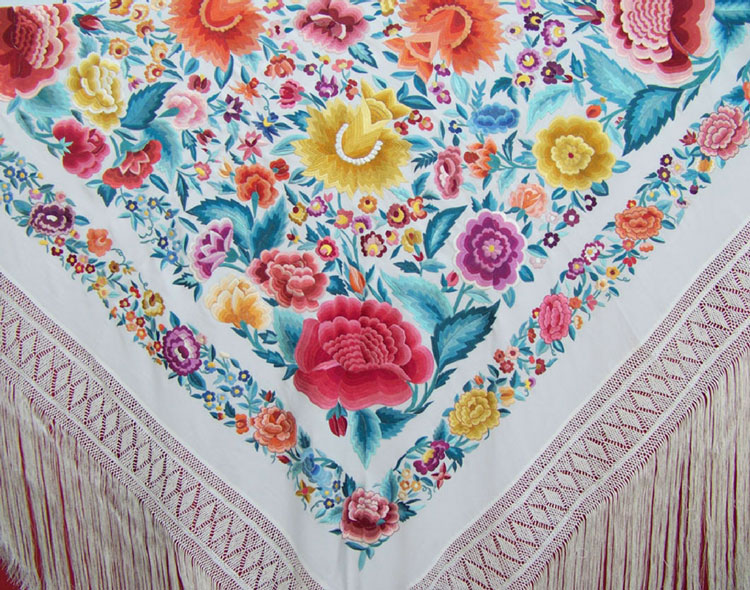 In the first half of the 19th century, the powerful English textile industry and European fashions imposed their grey and opaque tones on women’s clothing. This fact made the Manila shawl fall into disgrace among the bourgeoisie, descending its use in social strata until it took refuge with dresses such as the manolas from Madrid or those worn by some gypsy women in many Spanish cities. 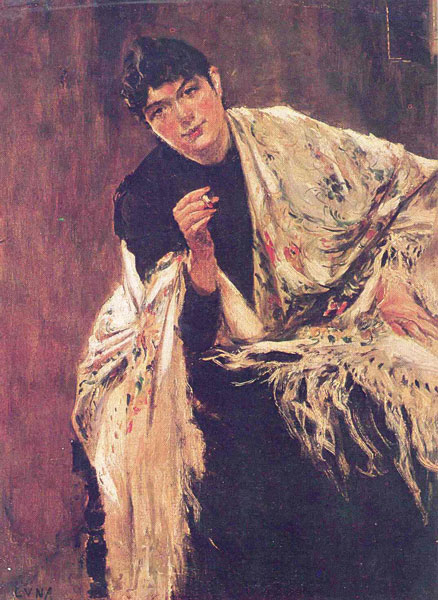 “Chula” (1895), by Juan Luna. Chula (as well as “manola”) was the name used to refer to Madrid working class women long time ago

Manila shawls were also used as an ornament for house elements, such as sofas, pianos or even balconies. In fact, if you have the opportunity to visit some Spanish houses of people with traditional tastes, you will have the possibility to see how some of them decorate some elements of their houses with Manila shawls. Nevertheless, this is almost exclusive of the southern Spanish region of Andalusia, where the “flamenco” dance is more popular and in which women usually dress with this garment.

Nowadays, Manila shawls keep being very popular in Spain, especially in the southern region of Andalusia. Women usually dress with Manila shawls in special occasions such as during the celebration of the Seville Fair (in April) or in some special events during the Holy Week, among others. 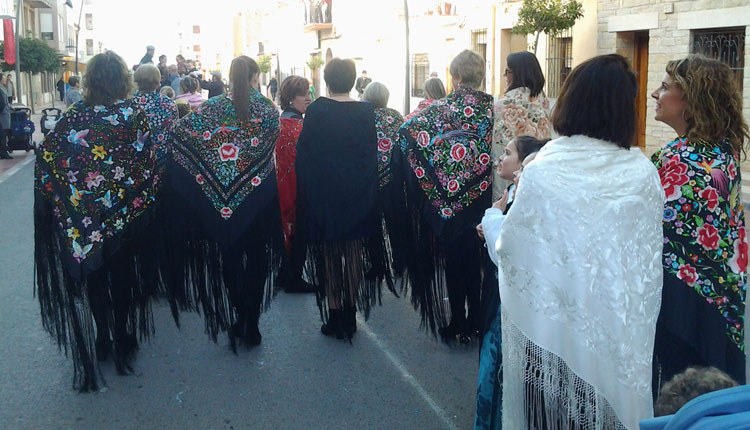 Spanish women wearing manila shawls while walking on the street

Manufacturing of the Manila shawl

The Manila shawl is made of silk sewn with silk threads. Its shape is usually a large square, warped in different colors (the most classic ones are black and ivory). 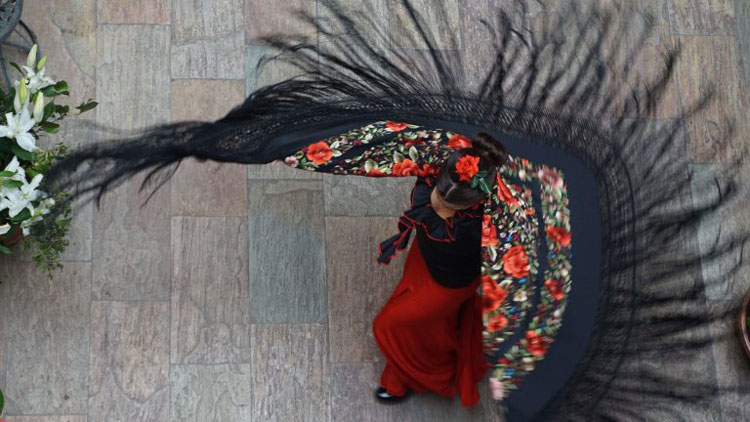 Before working on the Manila shawl, the drawing is made on paper and then it is perforated. Then, the perforated templates are marked with chalk, leaving the mark on the fabric, which then is taken to the embroidery taboret to proceed to embroider it. On this case, the most common technique for embroidery is called “acu pictae” (needle painting).

The making of the Manila shawl is finished with the placement of the fringes, an element inherited from the Arabs, which are also made with silk thread and macramé technique. The fringes form drawings based on knots, and they constitute one of the most complex and showy textile works. 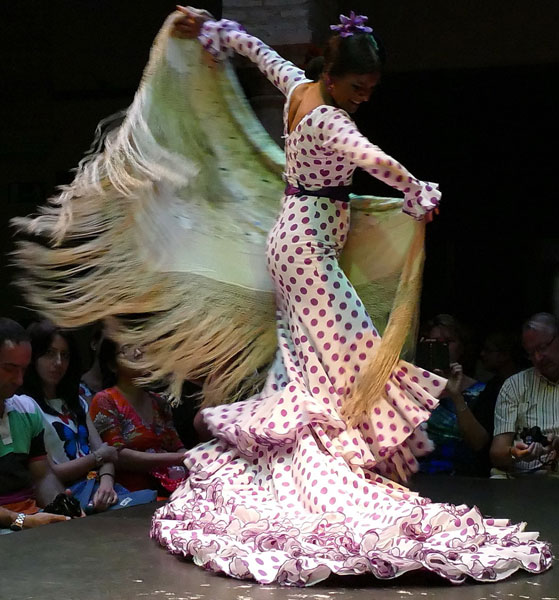 Centuries ago, in order to make the Manila shawls reach the ports of destination in optimum conditions after its long journey, they designed some special packing cases. They were designed and manufactured in the Philippines, and consisted of square boxes of lacquered and gilded wood, decorated with mother-of-pearl inlays and Chinese motifs. Inside they contained another cardboard box with a single unit of a Manila shawl folded.

If you are interested in buying a Manila shawl (or many of them!) you have to choose the quality and material of the unit you want to get.

Many of them are made of polyester and imported from China. Logically, these are the ones with the lowest quality, but also the cheapest. They may range from 20 to 300 euros, depending on the complexity of the patterns in the embroidery.

The best ones are made and sold in the Spanish city of Sevilla (the same one where trade ships with Manila shawls from The Philippines docked centuries ago). There is a street in Seville called “Calle Sierpes” (Sierpes Street) where you can find shops and some of the most beautiful Manila shawls. They are made of silk (you may find some of them made of polyester too, just pay attention) and the price range goes from some hundred euros (300 – 400 €) to many thousand euros. Here the limit is in your tastes and your wallet. 😊

Some more pictures of manila shawls